People dashed back and forth, loading wagons and gathering their children. They must  escape before it was too late!

Tom watched as his friend raced toward the battle. Just as Ethan disappeared amidst the smoke of discharging weapons and a horde of soldiers, a large figure emerged. He spoke in clipped authoritative tones.

“Does anyone have a mount I might use! Can anyone tell me who’s in charge of this town!” His eyes lit on the man kneeling beside the fallen soldier. “Are you a doctor?  There will be massive casualties coming in!”

The man’s military bearing—plus his uniform—showed immediately that he was an officer.

Doctor Haskins rose. “We’re working on getting a hospital organized. There’s one down the road but we’re evacuating them.They’re too close to town. We have very  little medicine and supplies, but we’ll do our best.”

The man nodded. “Who’s in charge?”

“The council is meeting at my uncle’s!” put in Tom. “I’m sure he’ll let you use one of his horses!”

“Take him to the house quick, Tom,” said Doctor Haskins. He turned to the officer, “How much time do we have?”

“None, sir!  They’re upon us. And I, with no way to signal or bring my men together! There’s a division coming from the west. They should be nearly here. But most of my officers are down. And they got my drummer—and the bugler has deserted!”

Both men looked at him in amazement.

“You know the signals?” asked the officer, briskly.

He ran toward the house. Simon was outside with horses and the wagon. Molly was climbing aboard.

“Simon! This man needs a horse!”

The servant took in the situation immediately and started unhitching one of the animals. “I’ll saddle him right away, sir!”

They hurried up the steps into the house, meeting several more council members rushing out to various errands.

“I’ll get my drum!” Tom ran up the stairs, leaving the officer to introduce himself.

He was back down in about a minute. The officer turned from his discussion with Uncle  Josiah.

“Show me what you can do.” He named off a signal.

Tom did it perfectly, glad he had spent so much time practicing.

The man barked out another.

Two more, and the officer was convinced. Uncle Josiah stood with mouth open in disbelief.

“You have your uncle’s permission?” the officer snapped.

Tom’s heart sank. He would never have had his mother’s, if she were here— and Aunt Abigail wouldn’t think he could do it, anyway.

But Uncle Josiah gazed down at him—and nodded. “Godspeed, nephew.”

The big man seemed in total control, in spite of the situation. He strode out of the house with Tom scurrying behind, and mounted the horse that Simon had barely finished saddling. Molly looked on in astonishment, noting the drum in Tom’s hands. Then she smiled at Tom with full confidence in her expression.

“Forward, boy!” barked the commander, for that was what he was. Commander Harrington, actually.

Tom glanced about at the chaos around him, took a deep breath, and drummed out the signal.

The doctor looked up, amazed, as he guided a horse who was pulling a wagonload  of supplies from the general store and doctor’s office. The wounded man was in there, too. The doctor gave Tom a wave and a grin and climbed up onto the seat.

Tom gave the signal. He was amazed at how quickly order was restored. Soldiers snapped to, looking toward their commander. They quickly took up their rifles and loaded. They faced the enemies that were coming on, fired, then retreated to hiding places.

“Load and fire!”  Tom gave the signal again, keeping close to the commander so he could hear his orders.

It was easier to see the wounded now. The doctor leaped off his wagon to lift them in. Soon he was driving off, in a great hurry to get them some help.

And suddenly they all saw a crowd coming. Townspeople. Old men and youth of fourteen or fifteen, not old enough to be in battle normally. Several women along with them, all brandishing weapons.

The soldiers would have cheered if they’d had the time. They had help! Other women, took off in their wagons with their broods, heading for safety. The area was suddenly clear as people got out of the way. The soldiers could see what was going on now, and be ready for orders.

“Left!” shouted Commander Harrington. The townspeople along with the soldiers obeyed as Tom gave the signal.

The soldiers were fighting instead of fleeing now. They were protecting the town and fighting back.  The Red Coats didn’t seem phased, however. They regrouped quickly from the volleys of bullets.

“Watch yourself, boy,” said the commander.

Tom ducked behind a wagon as the commander raised his musket and fired.

Suddenly Tom saw movement from the west. The battalion that the commander was expecting—it was here!

As he followed Officer Harrington’s directions, he heard another drummer, far off echoing his signals. They were joining them in the fight. The enemy however seemed to continue to stream in upon them.

Tom kept his eyes on the commander as much as he could, while dodging bullets and trying to see through smoke. Finally, he drummed out Cease Fire—and the soldiers ducked behind buildings and houses for a rest.

The commander glanced down at him. “Well done, boy.”

Suddenly there was Uncle Josiah, “we’ve collected some weapons.”

The man gazed at the cart-full of muskets and pistols and simply said, “good. Our ammunition is all but gone.” He gave orders for the weapons to be distributed. “We will fight for as long as we can. Washington was sending reinforcements but we’ve seen nothing of them. They’ll come from the south if they get here at all. Boy—bring them back….”

The men regrouped at Tom’s signal. As usual, the drummer some distance away, in the other division, heard and echoed it.

Suddenly, in the midst of all the men marching forward, he glimpsed—Ethan! Stumbling toward them! Was he wounded? No, he was dragging somebody. Tom started toward them, but a voice stopped him.

It was Uncle Josiah. “Steady, boy. Stick to your job. I’ll take care of them.”

Uncle Josiah hurried through the smoke and mass of soldiers, even as the commander’s voice brought Tom another order. He was forced to forget about his friend—and his uncle—for the moment.

It seemed like hours later, but the sun was just overhead—it had to be only noon. The American soldiers and townspeople were fighting valiantly, but it seemed to be doing no good. The number of Red Coats coming at them was far beyond their own numbers.

A messenger came galloping up on horseback and spoke to Commander Harrington. Tom heard it all. Reinforcements had arrived!  The Red Coats were boxed in.

Ethan had a broken wrist. The friend whose life he’d saved was mending in one of Uncle Josiah’s bedrooms, along with a few other wounded soldiers. The hospital a mile away had swelled to fill another large field with tents—and even those were jam-packed  with wounded, both American and British. The rest of the British soldiers were being transported to the army prison some distance away.

Tom and his family, including Nate, on crutches, waited at the stage office along with Doctor Haskins and Ethan.

You’ll be back,” said Ethan confidently.

“Maybe we can come and help you rebuild.”

“That will be a while in coming,” said Doctor Haskins, cheerfully. “There’s much more important things going on. Some of these wounded men will be here for some time to come. But thanks to your uncle’s hospitality, we’ll be all right until then.”

“And the girls and Mary will be coming tomorrow,” said Ethan.

Tom was surprised that he missed his spoiled sisters, but Alex had related that they were learning some things—had even been helping in the inn kitchen, since Bridgeton was overflowing with people who had fled. Once the girls arrived here, they would be required to help Molly, too, for she had a much larger household to handle now.

Then, rather surprised at himself once again, Tom realized that he very much wanted to see his mother. And well, actually—he found that he missed Aunt Abigail just a little bit, too.

With all that had happened, he could have plenty to brag about—but he suddenly realized that he didn’t want to.

He glanced at Nate and Ethan—and had a feeling that trusting God and giving Him the glory wasn’t such a bad way to live, after all. 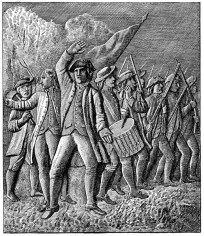