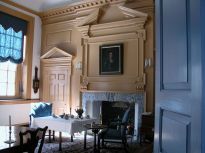 “Elaina and Margorie, you’ll go with the servants to Mrs. Bedford’s inn, two towns over. No, go right on out. You don’t have time to take anything. Alex will have the wagon hitched up by now.”

“But Father! An inn? With common people?”

“We have to take our clothes! Mary, go pack for us.”

He glanced at them sternly for daring to argue, then addressed the wide-eyed maid. “Mary, get Cook and take the girls out. We’ll join you there as soon as we can.” He turned back to his daughters. “It’s a perfectly respectable inn and she’s a good woman. Now, go!” 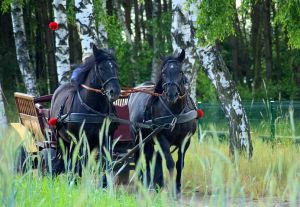 The servants bustled the girls out, even as they were still fussing about it.

The man was unlocking his safe and throwing a bundle of papers and some money into a satchel, then he grabbed his doctor’s bag, even as he talked.  “Ethan, I think it’s best if we get Nathanial and Tom back to the hospital. They mustn’t be found with us and that’s the most sensible place for him to show up with a bad leg. Nathanial, no one will question it, and you can go on to your uncle’s from there. Talk to Miss. Evans. She’ll arrange a ride.”

“But Miss Evans might not be there. She was going to town for supplies,” Ethan reminded him.

“She’ll be there,” said the father, as he grabbed his coat and urged the others to follow. “She stays around camp even on her time off, making treats for the men and such. She’ll be back with the food and supplies by now. Nathanial can’t ride a horse yet, that’s for sure. You’ll have to go on foot. Ethan I’ll wait for you in the old grove, with the horses.”

“But—I think it’s too late!”  Tom had been watching out the window as the two servants hurried the girls into the wagon. Alex was driving, and they took off down the lane and out of sight.  They had disappeared but….“What’s that strange light?”

The sun was getting lower in the sky but it certainly wasn’t setting yet.

Tom suddenly realized that, sure enough, what he was seeing was a horde of people,  moving toward the house, carrying torches.

The doctor didn’t bother coming to the window. “It’s not too late,” he said calmly. “You three go.”

“What about you?” asked Nate, in a panic.

“I’m going, too, in just a moment. Jason probably got the horses to the grove. The townspeople won’t come there, it’s very hidden. And Ethan and I know a few shortcuts to Bridgeton. Go! Now!”

Nate shook his hand. “Thank you, and send us word if we can help you in any way. I know Uncle Josiah will do anything you need.”

The two boys and Nate were heading toward the door, when there was the pounding of the doorknocker.

“Aaron! Aaron!” came an urgent voice. “You have to get out!”

Ethan pulled the door open, and a man burst in.

“Robert,” said the doctor. “Thank you, but we know. You shouldn’t have endangered yourself by coming.”

“No listen,” the newcomer grasped his friend’s arm. “They’re surrounding the place. They’re coming ‘round back.  They’re going to set the woods on fire, too, if need be! I brought you weapons!”

The doctor had grabbed his own pistol and tucked it in his belt earlier. Now he said, “Ethan, take the rifle. Nathanial, you take the pistol. The only way now, is through the swamp. We’ll have to go with you. Ethan, run and get the horses.  If Jason tied them in the grove, they’ll die if the woods are set on fire.”

But apparently Jason hadn’t had time.  They watched as the crowd moved as one big mass. They could hear shouting now. Tom suddenly saw the two horses that had been left for Ethan and the doctor. Midnight and Ginger galloped across the field, terrified at the noise and fire-lit torches coming towards them. 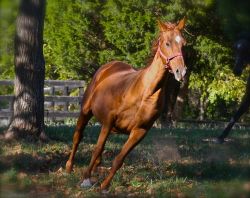 Midnight gathered himself and sprang, making it over the fence. Ginger followed.

“They’re heading toward the swamp. We’ll get them there. Maybe we can get Nathanial up on Ginger—with everyone helping!”

They clambered down the veranda steps, ducking around the corner of the house. Robert untied his own horse from a rail and led him along. 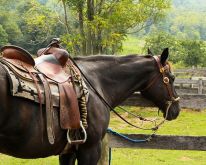 They saw in the distance, another group of people heading their way from behind the house. They also carried torches. 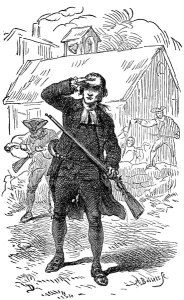 The five managed to hide behind bushes and trees as they made their slow way down to the swamp, taking turns helping Nate.

Tom knew his brother was in pain, but Nate made a gallant effort, lips clenched as he tried not to cry out.

The two animals were at the edge of the swamp, reluctant to enter. They seemed to sense that it was dangerous. Ethan ran over and Tom followed. 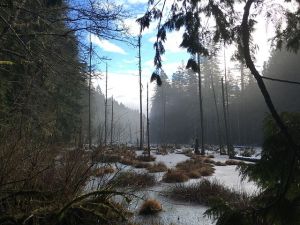 “There now, good boy. You’re all right.  Those people aren’t going to hurt you,” Ethan soothed. “That was some jump, though. Never thought you could get over a fence that high. Tom, get Ginger. Just lead her. She’ll come.”

Between the four of them, they were able to get Nate onto the horse. They boosted Tom up in back of him. The doctor and Ethan rode Midnight, Ethan in front since he knew the swamp so well.

They turned toward the house before plunging into the bog.

They watched the frenzied mob, throwing the torches at the house. Even from here, they could hear rocks smashing through the fancy glass windows. Tom watched as his new friends’ home went up in flames.

“It’s all right,” said the doctor quietly,  “there’s more to this life than possessions.”

“We will have them punished,” stormed Robert. “They will be arrested. I know who the ringleaders are. They were in the taverns, drunk, going out and inciting the people. We’ll get you to Josiah’s and you’ll be safe there.  He and others in the government will not allow this. And at least you’ll still have your land.”

“And my children, first of all. And our God is in control.”

“Your girls and servants got off safely. I saw the wagon when I came, and the mob was not here yet. They didn’t see them, I’m sure.”

Tom listened to all this with great interest. How could the man act this way in light of what was happening? The misunderstandings…the violence. He knew now that they all, even Robert who had come to warn them, could have been badly hurt in all this. And what about the girls and the women?  How dare people they do this, especially when  children and servants were around?

But Robert was continuing, “The council men were ready to get out and about. They were sick of being cooped up at the courthouse. They either went home to bed or out hunting. If they’d seen all this, they would have stopped all this before it began.” He turned to Nate and Tom and explained, “I ’m a secretary for the  council. Anyway, once your uncle left with the documents, I finished up and stopped at the tavern for a hot meal before going home—that’s where I heard two of them talking.”

They were carefully picking their way through the muddy, grassy bog, watching for sinkholes and gators. Finally Ethan brought them up onto dry ground, and they continued their cautious trek through,  The wind was blowing clouds of smoke toward them. Tom wondered if the townspeople might follow. He was rather glad that the smoke screened them. 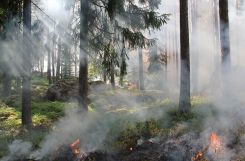 “Almost there,” said Ethan, as they trooped through water and mud once again, then the horses climbed the bank.  Tom was relieved to see the tents of the camp hospital.

“Not quite yet. Not until we get to your uncle’s. They won’t dare do anything to his house,” said Robert. “Besides we’ve got more than half the townspeople on our side and they won’t stand for any more foolishness.Even if you were Tories, this behavior is unacceptable.”

“Let’s get inside and rest a bit.  Nathanial, I want to look at that leg. Is it bleeding again?  I knew this wasn’t good for it. Ethan, go find Dr. Hardy.  We can trust him.”

They were trying to be nonchalant.  Getting their horses over to the paddock area where several wagons and buggies stood. A half a dozen or so horses grazed peacefully in a small fenced in space.

But just as they were dismounting and helping Nate down, a figure came rushing toward them.

A nurse—then another!  It was Miss Evans, and the nice one Tom had met the first day.

“Come in here!  Quick!  Oh, you do smell of smoke!” Miss. Evans exclaimed.

“Tom, isn’t it? You found your brother!  Come on now, let me help,” said the other nurse as she took Nate’s arm and they half carried him into a nearby tent. “Caleb wants to see you anyway. It’s too bad that smoke  is so strong.  They’ll know—oh well—”

Nate was starting to pass out from the pain finally, and they were having difficulty holding him up.

“What’s going on?” asked the doctor.  “How did you know we were coming?”

“A few of the mob came round to see if you were here. They know the only way left was through the swamp.”

“They mustn’t find you! Oh, Doctor Hardy, there you are.” Miss Evans rushed them down an aisle between cots, just as the shouting of drunken men was heard.

Doctor Hardy’s voice rang over them. “Get away from here. There’s sick men here. What do you think you’re doing? You’re drunk! Go home before I call the constable!”

Everyone knew that the constable was a more than mile away, in town, but the stern voice apparently slowed them down for the moment. Relieved, Tom followed the nurses as they led them to a far corner.  “There’s some empty cots, here,” Miss Evans told them.  “Let’s at least get your brother onto one. It looks like his wound is bleeding badly.”

Tom wondered what would happen next. Oh, how had he got into all this? And would Nate and all his new friends be safe?