From the beginning, pilots like Betty Greene and many others were the first to fly small planes  to help their fellow missionaries. They were the pioneers of missionary aviation!

They, along with the men and women pilots of today, are incredibly brave and faithful to God.

Before planes, missionaries hiked up and down mountains and canyons for weeks to get supplies or medical help.

Riding horses and donkeys sounds like fun, but after a few days on narrow trails looking straight down into the clouds, even that can get pretty tiresome—and a bit scary.

Canoeing is always fun, but when you’re paddling against the current for hours, that too can get  discouraging. Sometimes they had to carry the canoes!

One time, missionaries spent all day struggling against the currents and rapids, only to look back and see the place that they started that morning. That’s when someone said—no more.  Planes are the answer!

MAF (Missionary Aviation Fellowship) and JAARS (which used to stand for Jungle Aviation And Radio Service) were started way back when your great grandparents were young.  They became two of the biggest organizations that helped missionaries on their way.  Trips that took days or weeks by mule or on foot, could be done in just a few hours.

Other smaller organizations were around, too. One had only two pilots and flew only in Mexico. They often dropped radios, tuned to only one station that gave the message of the gospel, to the people below.

All through the years, pilots and mechanics were making improvements, adjusting equipment, thinking of new ways to do their job better, safer, and faster.

Mission Aviation Fellowship was originally called Christian Airmen Missionary Fellowship. Many of the pilots, including Betty Greene, had been in the war and now wanted to use their talents to help missionaries.

JAARS (Jungle Aviataion and Radio Service) was once part of Wycliffe Bible Translators. Wycliffe missionaries translate the Bible into other languages so that everyone can have the Bible in their own language. Those missionaries lived deep in the jungles or high up in the mountains and needed the services of planes.

Pilots are focused on one goal—getting their cargo safely to where they need to go. They carry all kinds of things –cows, chickens, plants and seeds, goats, building materials, medicine, bicycles—

oh, and lots of people, too. Many are taken out to the hospital for medical treatment, to school, or to the airport so they can get to their home countries to visit family, supporters, and report to their mission board. Other people come to build, teach, bring food during disasters. The mission organization Samaritan’s Purse has their own planes that bring many things to people all over the world, including the famous shoeboxes full of gifts at Christmas.

Pilots need to be good mechanics! In case of emergency, they can often fix their plane well enough to get home.

Nate Saint, who flew in Ecuador in his little yellow plane, came up with a way to lower articles to the ground in a canvas bucket. It’s not as easy as it sounds.  It has to be done just right in order for the  bucket to land in the right place. He and his friends lowered gifts and the people sent things back to them, such as a parrot.

Many pilots drop packages to missionaries who live in places where the planes can’t land. They have to know what they’re doing—or the packages will end up in a tree—and in the jungle, those trees are pretty tall!

Sometimes the job isn’t much fun—routine flights hour after hour, lots of paperwork, and endless maintenance—but it’s part of the work of being a missionary pilot.

What about the dangers—there’s A LOT of them:

There’s always the weather—plus flying in the jungle or the mountains can be tricky, with dangerous winds, hidden cliffs and ledges.

Pilots are trained well and are very careful. They have to be! But accidents can still happen or they can get lost in dangerous territory.

THAT’S WHY THEY NEED OUR PRAYERS.  PRAY FOR MISSIONARY PILOTS! 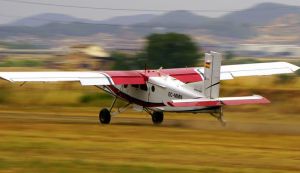 And watch for more-stories of brave pilots and God’s great faithfulness….and the newest technology!