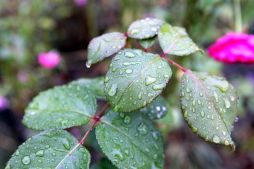 We know that God controls the weather, right? But we’re often not too happy about RAIN….

Well, it’s not always bad. Here’s a couple of times that rain was pretty amazing –and God had a plan in it all.

In certain areas of the world, people just take the rainy season in stride, expecting pouring rain and flooding, often welcoming it for their fields. But one day, a doctor in Bangladesh experienced a miracle of God during the rainy season.

It’s always tough to deal with rules and regulations. The doctor and his team had lots of difficulties with government officials as they tried to buy land to build a mission hospital. But finally they found just the right place. It was time to survey the land, so they could buy the property.

It had rained for days, and when they asked the surveyors to come, the men laughed.  Not in this rain! They were sure it would go on and on, as usual.

But the doctor insisted, for they could lose the opportunity to buy the land if they didn’t move quickly. Time was running out.

The next day it was still raining just as hard, but he talked the surveyors into going anyway.

They got in the jeep and started driving to the site, but the monsoon rains just got worse.  The surveyors were laughing at this foolish white missionary. But the doctor was praying.

And just as they arrived at the land he hoped to buy for the hospital….

“suddenly as though a giant hand had sealed the heavens, the rain abruptly stopped…I looked up to see a tiny patch of blue in the gray sky which seemed to me a symbol of the goodness and love of God.”

The doctor was able to get the land. The hospital that was built there was used for many years to come, for God’s glory.

And what about this one….

In another part of the world, war was upon the land, soldiers were marching toward the missionaries’ outposts, crossing mountainous terrain. The missionaries were told to get out of  the country, but they were determined to have their yearly Bible conference first.

They longed for one last chance to prepare the people spiritually for the hard times that were  coming.  They decided to go ahead with the conference, and native Christians came from miles around.  Throughout the conference, blinding rain poured down. Wind and flooding stopped the enemy from getting through the passes and over rocky hills, and shielded the natives and missionaries from attack.

They were able to study God’s word, and sing and pray together in peace. It was the last time that many of them would see each other, and God gave them strength for the difficult times ahead.

There’s other kinds of storms besides rain.

In the desert, intense sandstorms are just as normal as rainstorms are in other areas. One story I heard took place during wartime.  A blinding, violent storm arrived, and the tanks and trucks were stopped for almost two days. As the soldiers waited it out, sand swirling everywhere and clogging their machinery, God was doing something awesome. 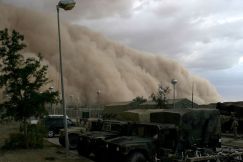 When the storm finally passed and soldiers emerged from their tanks, they saw that great amounts of sand had been blown away–and they were able to see  deadly mines that had been hidden all across the landscape. These mines would have destroyed them.

Though some doubt this particular story, I choose to believe the godly people who told of it. We all know that God has delivered in great ways throughout the Bible and throughout history.

So next time you see some beautiful act of creation or a furious storm, remember God’s glory and power.

One episode from Daktar  Diplomat to Bangladesh by Dr. Viggo Olson. Other sources were also used for these stories.