Memorial Day…Flag Day…the Fourth of July….these are all times when Americans remember and celebrate special events and people.

Every country has a flag. Every nation has times when they look back with thanksgiving and pride at the bravery of their heroes.

Flag Day  is June 14th, honoring the day in 1977 when our government proclaimed  the official flag of the United States. Though there had been lots of banners already being used and many ideas and designs, this one had thirteen stars for the thirteen colonies.  Many more stars have been added over the years as more states have become part of America. The flag is sometimes called The Stars and Stripes, Old Glory, or the Grand Old Flag.

During this special time, don’t forget to thank God for the country we live in and that our ancestors fought for, just as other nations love and remember their special days. 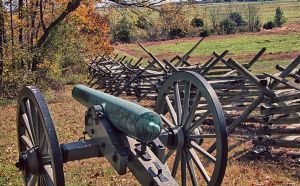 “Mom! Mom!  We found it!” Kelly yelled her news from the top of the attic stairs.

Both Mom and Brent hurried up the steep steps. The little girls tramped up after them.

“There really is a hiding place!”

“So I see,” Mom said excitedly.

Brent squeezed in to see the gaping space in the wall, then turned to where the girls were unfolding the large flag on an old table. Very carefully, Mom helped them lay it out. 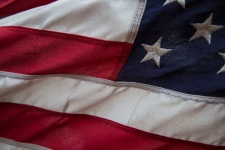 Abby touched one of the yellowed white stripes.  “It’s amazing!”

Kelly reflected that the lines where it had been folded would probably never come out after all these years;. Then she remembered that there were people who knew how to restore old flags.

Kelly didn’t feel like talking. She was too awed that it really was here in her own house and safe. They actually had found the hiding place-finally.

Mom started to refold the flag. They replaced it in the box, and carried it downstairs to show the rest of the family when they arrived home.  Abby was already calling on her cell phone for her mother and grandmother to come over and see their find.

Later, Mom had news.  “Mrs. Carlisle at the Historical Society wants to put it on the float in a glass case. Then other people can see it, too.  Then we’ll let the museum display it until the Fourth of July.  After that, we’ll decide what we want to do with it.”

Kelly knew this was the season when a lot of people visited the local museum.  She was excited that their flag would be seen by everybody.

Kelly was getting  rather old to sit with her father in his chair near the fireplace. But she didn’t care tonight. He hugged her as she squeezed in next to him.

“Whoo,” he let out his breath. “That’s quite a question.”

He thought for a moment. “It was pretty horrible most of the time. But there were happy times, too—like when we rescued children and found them places in orphanages, and then people came and adopted some of them.  The best was when we could actually get people back into their homes and help get them settled.”

He looked off across the room, then went on, “Christmas—when we collected presents for the kids. And once we found a woman and her children in a pretty bad way, and we gave them food and found them a place to stay.” 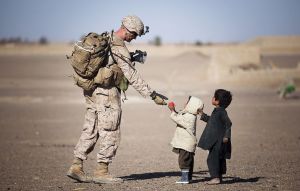 The boys came in to listen then, sprawling on the couch.

“Once we rescued a puppy from the ruins of a house. He was stuck. We must have looked so silly—half a dozen big soldiers in full regalia, and here we’re all  trying to get one little puppy out.”

“And then the little group of believers I found! That was so great. We could hardly understand each other, but they saw my little New Testament and knew I was a Christian. I sang our hymns and they sang theirs, and we prayed together. They’d escaped from somewhere and traveled across desert terrain in the most broken down old truck I’d ever seen.”

“What happened to them?” asked Doug.

“I don’t know. Never saw them again, but I’ll see them in heaven….Our chaplain—now he was a great guy. One of the greatest Christian men I ever knew. I was a new Christian then and recovering from drinking. He really helped me a lot.”

“A pastor for soldiers,” said Dad.  “That chaplain was great to me—to us all. He died in one of the raids….”

Her father’s voice dwindled off.  Then he gazed around at them all, “nobody likes to go to war.  But we felt if we could save people from a horrible dictator, it’d be worth it.  When we got to one of his palaces,  we saw the places where innocent people had been in prison and hurt terribly.  We saw the awful things that were done to people who only wanted to live in freedom.” 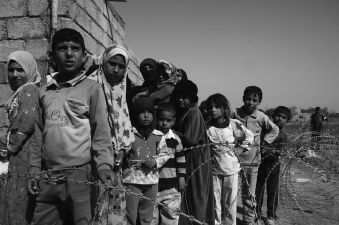 “Things don’t always work out. In the past, sometimes Americans  and other nations have gone to help in places where people were in terrible danger, but it backfired. We can’t always help like we’d hoped. And sometimes governments and citizens make wrong choices. That doesn’t mean it was wrong to try.”

Kelly leaned her head on his shoulder, and they sat there for some time quietly.

“Steve was a Christian,” she said, finally. “Abby says he always was really brave. Even when he was a kid.”

“I know, honey. He’s with the Lord. But it will take a lot of time for Abby. You’re always such a good faithful friend, and that’s what she needs right now.”

The Memorial Day parade and ceremonies were somewhat different than the excitement and fun of the Fourth of July, that would come in a month or so. 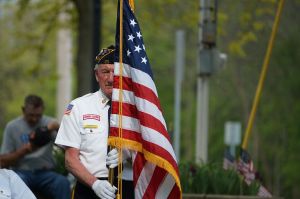 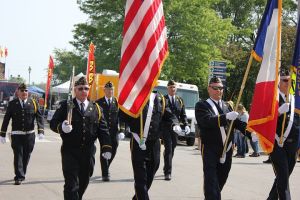 The float, which was a memorial for Steve and others who had died recently in war, was very tasteful.  The flag was on another side in a glass case which stood upright so people could see it.  It was surrounded by images of the Revolutionary War.  On other parts of the float were memorials of Vietnam, the Civil War, the World Wars, and others.

Later, at the ceremony, important people spoke about Steve and the other solders, then veterans from all the wars stood. 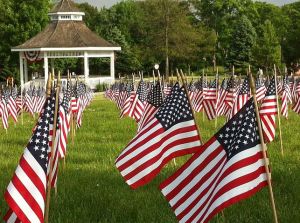 Kelly looked up proudly at her father, glad that he was being honored for his service.  He could have been killed, too, yet he had taken the risk, and gone and done his duty to help those who needed it.

Kelly heard her name, and her mind flashed back to what was going on.  The flag had been moved to the side of the stage. A Historical Society volunteer was briefly telling the story, and thanking the Loring family for sharing the flag.  She told where it would be displayed so that people could see it in their little museum.  The diaries and letters belonging to Abby’s family would also be on display.

Then Kelly and Abby and Brent walked over to the cemetery to see the work that kind volunteers had done to restore Steve’s grave. 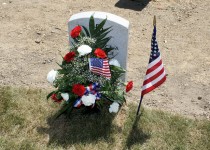 “Well, you did it!” said Brent as they headed home a little later, hungry and ready for their cookout with Abby’s family. Dad probably had the grill going and the picnic table would be loaded with food.

“You wouldn’t stop until you found it.”

“I just knew there had to be something in our two hundred year old house,” laughed Kelly.  “At least I hoped so. I’m so glad it was the flag.”

“Let’s hope, if the time ever comes, we can all be as brave as Jack and Mary Ellen and Abigail–and Steve.” said Abby.

Then the girls broke into a run, racing each other across the dunes and around the  pond,  clambering over the old  stone wall, the best of friends, just like their ancestors of two hundred years ago.