Sadie floated downstream for several hours before the current changed and she was obliged to take up her oars again. By the time she reached Red Haven, she was very weary. It was close to dawn and she must make a decision.

She was to go to the house of Mister Henry Reed, her father’s friend. Should she go under cover of darkness or should she wait? Perhaps it would be better to blend in with the townspeople doing early morning errands. She also knew that she needed to get to shore as quickly as possible, for not far from here the creek would flow into the bay.

“You must get ashore before that,” her father had warned. “The currents will whisk you out to deeper water before you know it.”

There was yet another problem. There were always scouts guarding the road into town. Even though it was a Tory town, the enemy was cautious. She could see the two scouts now, high up on the embankment, dark silhouettes against the bright moon. They had only to look down toward the stream and they would see her.

She didn’t dare even dip her oars for fear they would hear. She drifted toward a little inlet, and was surprised to see that a mist was rising from the water. As she moved on, it became deep and white. The air was very humid.

Before they call, You will answer, she remembered from the Scriptures. Sadie had always known that God was with her—ever since she had asked Him to forgive her sins and be her Savior at Sunday service one day. She knew He was taking care of her now as the fog hid her completely.

Finally Sadie took a chance and quietly drew a few strokes with her oars. She couldn’t see the bay, but she knew it was near. She must get to shore. A moment later, she was safe in the shallows near the bank. Grabbing at a slender tree, she tied her boat. 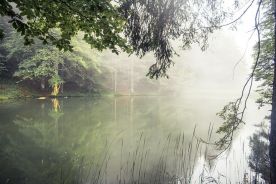 Sadie gathered up her supplies, and stepped out onto the bank. She drew the rope that was attached to her bundle over her head so that it hung at her side. Grasping at small trees and branches, she made it up the bank though her shoes were muddy  and her dress dirty and wrinkled. She did her best to smooth her clothes and hair, then ventured out onto the street.

Sadie shrank back into the shadows for a moment as a guard passed on the other side of the road.

Finally she took a deep breath and emerged, slipping past quiet shops and houses. The only problem with trying to find Mister Reed’s house now was that she couldn’t see the street signs.  She squinted up in the darkness, trying to follow her father’s directions, but soon, to her dismay, found herself down by the wharf! How had she ended up here?

The outline of two British warships rose high in the moonlight, and many small boats lined the dock. There was much more activity here, as men were already loading barges or heading out in fishing boats. Lantern light streamed from a number of shops, and she again slunk into the shadows.

As Sadie watched the comings and goings of the shadowy figures, intent on their errands, she breathed, help me, Lord God, I’m lost! Guide me….

Sometime later, just as she was noticing with panic that the sky over the bay was lightening to a pale pink, a black woman approached. She was striding along purposefully with a large basket. Something about the woman seemed to draw Sadie, and she finally made her decision.

“Pardon me….” She stepped out from the shadows. “Would you help me, please?”

The woman stopped short, and looked her up and down. She seemed a bit surprised that a white girl would address her so. But Sadie’s father didn’t own slaves, and Sadie had been taught to treat all adults with respect.

Finally the woman spoke cautiously. “What is it you need, miss?”

“Would you know where Mister Henry Reed lives?”

The woman stared down at her for a long moment.

When she finally spoke, she said, “Well, I guess I know what side you’re on.”

Sadie tensed, ready to run. This was a town full of Tories. She should have just gone back now that it was almost light, and checked the street signs. But the woman moved closer and whispered, “I wouldn’t be saying that name too loud. Come along. Quick, now.”

It was all right. She let out her breath in relief.

The woman walked swiftly back the way Sadie had come. Sadie was glad they were moving quickly for it was growing lighter every minute; the pale grayish pink clouds were turning rosy red, and a golden beam of sun was brightening the horizon. Soon  Sadie was pleasantly surprised to find that she’d  gone only a couple of streets out of her way.

“It’s across the square there. Don’t go to the front door. Best slip into the alley. His house is on the left. Go quick now.”

The woman nodded and disappeared into the dim shadows.

Sadie didn’t like the idea of going out into the open square in the middle of town, but she heard footsteps and realized that the guard was coming back. Knowing she had very little time, she moved into action. She emerged from the shadows and ran across the square, entering the alley just before the soldier turned the corner.

Leaning back against the wall of the house as he passed, she tried to catch her breath. She finally started across the narrow alley to the door on the left, when suddenly a door beside her swung open. A woman stepped out and took a great breath of warm summer air, as if glad to be alive on such a beautiful day. Then she turned and jumped, startled, as she looked straight at Sadie.

“What are you doing, child?”

Sadie was speechless. She must be a Tory. She was dressed in a deep blue morning dress of exquisite material that spoke of wealth. Many Tories seemed to be growing wealthier these days, while the colonists were being robbed of their livestock and property.

“Answer me, child. Who are you, and what are you doing in my alley?”

Sadie finally spoke. “I need to see your neighbor, ma’am.” She took a step toward the far door. “Henry Reed.”

The woman looked even more surprised. “Come in here—quick!”  She drew closer and grasped Sadie’s arm.

Sadie tried to pull away, and the woman murmured urgently. “Henry Reed isn’t there. He’s been arrested.”

Instantly, Sadie stopped struggling and followed the woman through the door, and down a flight of stairs. They entered a spacious kitchen. A large black woman turned from the fire, holding a spoon aloft. She looked at Sadie curiously as the door was firmly shut.

“Yes. The Redcoats seized his house. There’s a Tory family living there now.”

“If you’d done gone asking after Mister Reed, they’d have hauled you off to be questioned,” put in the black woman.

“But what shall I do!  I have a message. My father says Mister Reed knows where General Washington is camped, and I have a ma—”

“Don’t tell us!  The less we know, the better. But maybe my husband can help.”

Just then a richly dressed man appeared at a doorway.

“Oh, Edward! This girl wants Henry Reed. She needs someone to take a message to the camp.”

The man stared down at Sadie, thoughtfully.

He finally shook his head. “They know we’re loyal colonists. I wouldn’t get far without being followed. But I know someone who can help you. A farmer outside of town knows where the troops are camped. There’s a shopkeeper that goes out there every day to get fruit and vegetables. Wait here. I’ll see if he’s gone yet.”

“Thank you, sir,” Sadie sank into a chair in relief.

The black woman spooned porridge into a bowl, and set it before her. The white lady took her sack, and tucked a loaf of fresh bread into it. By the time Sadie had finished her breakfast, the man was back.

“He’ll be here in a moment. You’ll have to hide. Everyone knows all the children around here. They’d know you’re a stranger, and ask questions. Especially with you carrying a cloak on such a warm morning. To say nothing of the knapsack.”

“If you please, sir, I need my knapsack. I’ve got an important ma—”

He held up his hand, “don’t tell us. If we’re caught helping you, we can’t tell what we don’t know.”

A few minutes later, a wagon appeared and the driver turned into the alley and stopped outside the door.

He escorted her out the door, and a burly, red haired man with a jolly smile looked her over. “So this is my passenger, is it? You’re so small that we can hide you very nicely. Lobsterbacks search my wagon both coming and going.”

Sadie looked at the wagon which at this point was only filled with empty baskets, crates, and folded burlap bags. There didn’t seem to be any place to hide.

At her quizzical look, he laughed and looked about cautiously, then pressed a secret spring. The entire floor of the wagon lifted up, revealing a space beneath. He quickly pushed the boards back down.

“But that’s not the best part. I don’t often get anyone little enough to put in my other hiding place. I usually just use it for secret documents and weapons and such.”  He grinned at the look on Edward’s face. “All right, all right, I know I talk too much. But you worry too much.”

He turned back to Sadie, and continued on about the special features of his wagon. “If they were to find that hiding place, they wouldn’t bother looking further, but see this?”

He pressed another lever and suddenly the driver’s seat lifted, revealing a second crawl space. “In you go, lass.”

Sadie saw there were a lot more people out and about by now. No one seemed to be watching them, but she still moved quickly. She smiled at the two women. They were blocking the end of the alley quite efficiently, what with their skirts billowing in the summer breeze. Then she looked up at Edward who was waiting to help her in. “Thank you. All of you.”

The man gave her a boost, and she laid down in the secret hiding place, her cloak and knapsack in her arms in front of her. The opening closed, and she was very glad she wasn’t afraid of small spaces.

“Off we go,” murmured the man above her as they moved out.

Sure enough, they were stopped at the entrance to town.

The soldiers seemed to be making a good deal of noise and show, throwing the crates and baskets about, and not bothering to put them back. The storekeeper had to do that himself. But the soldiers didn’t find either hiding place, and soon they were on their way again.

“It’ll be a while now,” came the voice above her. “But we’re safe for the moment.”

As they jostled and rattled down the dirt road, Sadie had a feeling she’d be black and blue by the time they reached their destination. The large farm horses seemed to be taking their time, too. Would they ever get there?

Finally the man’s voice came again. “Not long now.”  Then suddenly, he came to an abrupt stop. “Who goes there!”

Sadie panicked. What could it be now!  And would she be discovered?