“I wish we knew what’s going to happen,” complained an old lady as they jounced and jolted over the road to the coast. “I’m too old for this.”

“Perga!  Perga! We’re going to Perga!” shouted little Isaiah. He couldn’t sit still, and was bouncing around even more than usual.

“I know we’re going to Perga,” said the old lady, dejectedly, “but we don’t know anyone. We don’t know what we’ll do when we get there. I’m tired of moving around, and having to trust strangers. I hate never knowing if someone’s going to betray us or not.”

“God has provided in so many ways,” said Zacarias gently. “And Amos knows people there. We’ll be all right.”

Anna knew that the old lady had reason to be disheartened. She had been in the Catacombs ever since the first persecution, since the stoning of Stephen. Her husband and grandson were still in jail, having been betrayed by neighbors.

“Sometimes I wonder if it’s worth it. It seemed so right when the Lord was here, preaching to us all, and healing, and doing miracles….”

“That’s what I wondered when I was in jail,” said Shimone. “But it is worth it. We’ll be in heaven with the Lord someday, and until then I want to help as many people as I can to know Him!”

Shimone seemed much better since he had made friends with Remus, the Greek slave. Remus seemed to glow with excitement about knowing the true God.

He told them all that it was as if he had turned from the darkness of sin and idol worship to the light. One of the Twelve sometimes spoke of Jesus as being the Light of the world, so they understood what Remus was talking about.

Anna was glad God had given Shimone a new friend to encourage him.

“Jesus told us we would have tribulation,” Zacarias was saying. “He told us that families would betray each other, and friends would betray friends. We must expect it but remember what else He said….”

Everyone enthusiastically repeated the familiar words of Jesus with their leader, “ ‘Be of good cheer, I have overcome the world!’ ”

At that moment, the gates of Caesarea came into view. As the group made their way through the streets of the city to the docks, they stared and stared, trying to see everything at once.

For some it was the first time they had seen the ocean. 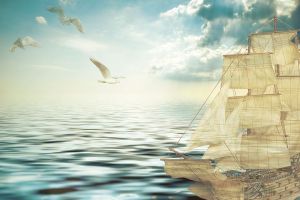 It seemed to go on forever!  Jacob and Anna watched the ships, and fishing boats, and all the activity as supplies and goods were loaded and unloaded.

After a few questions, Amos quickly found their ship and talked to his friend, the captain. He paid the gold that was required for all of them to book passage, and got permission to board early so they could get out of sight below deck.

“It’ll be dark, and smelly, and cramped,” he told them, “but once we’re out to sea, it will be safe to come back up.”

“Isn’t this wonderful after being underground for so long!” cried the old lady.

Anna was glad the woman was happier now. As for herself, she thought she could never get enough of the fresh smell of the sea air, and the pleasant wind whipping at her mantle. Reluctantly she followed Jacob, as they all headed for the ladder that would take them below to the hold.

Suddenly they heard a commotion on the wharf. Soldiers on horses were galloping towards them. Sailors, slaves, and merchants scattered to let them pass. The soldiers were coming straight toward their ship!

“Quick!  Get below deck,” urged the captain, but before they could move, the soldiers skidded to a stop, and brandished their swords. One, who was apparently in charge, leaped off his  horse.

“Stop!” shouted the soldier. “You are under arrest!”

A group of men came rushing up behind the soldiers. Jacob and Anna recognized them as Jewish leaders from Jerusalem. They had been followed!

“That’s them! Heretics! Blasphemers! Arrest them!”

All was confusion for a moment. Until a Roman soldier emerged from the captain’s chambers where he had apparently been eating a meal, for he still held a chunk of bread in his hand.

Hearing a familiar voice, Jacob and Anna whirled around. It was Marcus!  They looked at each other in dismay. So he had betrayed them. And the ship captain must be in on it, too! 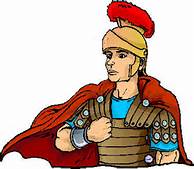 But suddenly Marcus met their gaze, saw their mother next to them, and seemed to recognize her. He put down the bread, walked over to the rail and called, “Centurion!  What is all this!  Who are these men?”

The commanding officer of the group of soldiers instantly saluted. “Sir, they’re members of the religious council in Jerusalem. They tell us these people are traitors against the Roman government. We’re here to arrest them.”

“But they are already my prisoners. I am taking them to Rome for trial before Caesar. You may go.”

The group of believers tried their best not to look shocked at this. They realized that this soldier, who was a stranger to most of them, was trying to help them.

The centurion looked uncertain. “Sir,” he ventured, “I see no chains. Why aren’t they bound?”

“Look at them!” roared Marcus. “They’re sick and weak. There’s old people and little children. Does it look as if I need to bind them?”  He turned to the believers. “Get in the hold!  Now!”

The group turned uncertainly, and headed down the ladder.

“See?  They will be no trouble, especially when we’re out to sea. I don’t know where you got your information but these people are already in my custody.”

“Yes, sir.”  The centurion and his men quickly wheeled their horses, and trotted off. As Jacob and Anna watched, waiting their turn at the ladder, they couldn’t help laughing at the sight of the Jewish leaders racing after the soldiers, calling, “Wait!  Wait!  There’s been a mistake!  You must arrest them!”

They didn’t look at all dignified at the moment, as their coats flapped in the wind. Soon they all were gone.

“All our passengers are here, and our supplies loaded. I don’t think it would hurt  to be off a bit early, do you?” asked the captain, with a twinkle in his eye.

“A very good idea,” agreed Marcus. “Let’s be on our way. They’ll be back when they check the orders.”

Jacob came forward and introduced him to Zacarias.

“Sir,” said Zacarias, “I can’t say that I condone lying, even to keep us out of prison, but thank you for helping us. We are most grateful.”

“What are you doing here?” asked Jacob.

“I’ve been transferred to Ephesus, one of the Greek cities. That should be interesting, I like seeing new people and places.”

“That’s not far from where we’re going!” exclaimed Jacob.

“This is wonderful,” grinned Marcus. “I was disappointed to be leaving Jerusalem before I saw you two again. I wanted to talk more about Jesus. I have many questions. This is your leader?  How fortunate. Perhaps your God had a hand in all this! ”

The men and Jacob went off to talk with the soldier while the women excitedly set about getting their supplies and food in order. The captain shouted out orders to his men and they prepared to set sail.

The old lady, with tears of joy in her eyes at their wonderful rescue, said, “yes, God did have a hand in this!  I won’t doubt anymore.”

Anna gave her a hug. She was sure they would find a good place to live and work and believers to worship with in Perga. And she had a strong feeling that soon Marcus would know the true God, too.

She just hoped he wouldn’t end up in trouble again.  She knew nothing good ever really came from a lie…. 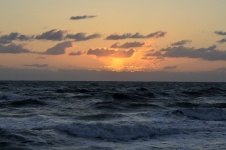