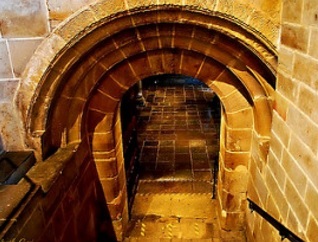 Jacob and Anna had been living in the catacombs for several weeks. Since their escape from prison, they had joined the small group of Christians living in the tunnels that passed under their section of the city. The catacombs also included the local burial place, so many bodies lay enclosed in stone compartments. That had been rather creepy at first, but the children had grown used to it.

What they couldn’t get used to was being inside — and underground. There were no doors or windows for sunlight to flow through, and though they were allowed to explore and roam the dim passageways, it wasn’t the same as going outside to play. Sometimes Jacob and Anna wondered if they would ever see the blue sky and green grass again.

“We’re safe. That’s what matters,” said Mama. “I know it’s hard but it’s better than prison, or worse, the coliseum in Rome.”

They understood, of course, and it really wasn’t all that bad. There weren’t many rules, since there was no place to go. Even the adults had to follow the main rule to never go above without permission from Zacarias, the leader of their little band.

And never betray their hiding place if they did go above. And never go down to the far end of Tunnel Three, for that section was very unsafe, and could collapse at any time.

That last one was the rule that was drummed into all of the children. The other two would never be a possibility, since they were never allowed topside. Some of the adults went out for water and medicine or to meet with the Twelve, but the children never did. That’s why it was a surprise, when after prayers one evening, Zacarias called them aside.

Prayer time had been filled with many serious issues that day. Zacarias, a kind elderly man, along with the thirty adults and ten children, were gathered in one of the larger stone chambers.

“We haven’t found another water source yet,” the old man had told them, “So we’ll have to continue going out by night to get water from the well.”

Jonathan, a young man who at the moment was extremely filthy, spoke up. “We thought we had found an opening from above, but it was a dead end. I think if we keep clearing away the dirt, we’ll find something, though. We may be directly under the main cistern.”

For some reason, clean water had run in from above ever since they had been hiding in the catacombs. They considered it a miracle of God that they didn’t have to sneak out to draw water at the well. But the hole where the water trickled in had dried up. Jonathan and some of the other men had been working on the problem. They obviously hadn’t had time to wash up before prayers.

“We’ll pray for that and also for food.” said Zacarias. “I hope our brothers above are safe. They haven’t brought anything in a while.”

The group spent a good deal of time in prayer, then after Jonathan and the others had cleaned up, the women brought out bread and cheese and figs. No one had as much as they’d like, for it was necessary to ration the food as well as the water. 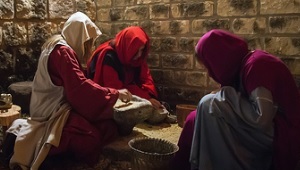 It was then that Zacarias called Jacob and Anna over to him. Thinking he was calling them for Story Time, for the children loved to hear his stories about the Master, they quickly went. But when they saw their mother coming as well, they were surprised. They also noticed the fearful look on her face.

“Jacob, Anna, I have a task for you, if you choose to accept it.”

“We want to help!” Anna assured him.

“I know you do. I know you feel there’s not much to do down here but Anna, we’re grateful that you take such good care of the babies. And Jacob, you’re a good faithful worker. But maybe you can help in another way. Your mother has agreed to allow it.”

Reluctantly, it seemed, from the look on her face. “I still would rather I did it,” said Mama, breaking into a cough.

“You’re too weak,” said the old man. It was true. Although Mama’s health had improved a good deal, she was still very tired. “Besides, you’d be recognized easily. You were a prominent business woman in the marketplace. But if you really have second thoughts about Jacob and Anna doing it….”

“I would never ask them if I didn’t think so. They’ll be fine as long as they obey my instructions.”

“But what is it!” exclaimed both children, who had been trying very hard to wait patiently.

Zacarias chuckled at their eagerness. “I’d like you to go above to buy some supplies. We have money, but no one to get the food. Barnabas and the others have been kind and generous, but we may not be able to depend on them for long. We have to be self-sufficient down here since they could be arrested at any time. I’d like you to try it and see how it goes. This time, you’ll put on rags so that there will be no chance of anyone recognizing you. I want you to look like common beggar children. Another time we’ll give you a different disguise.”

They were thrilled with the idea, not just at getting out but also being able to help. Besides, it would be interesting to try to fool everyone in the marketplace.

“Shimone, of course, has to go above, but it would look suspicious if he carried too much food back. You’ll go out with him tomorrow morning.”

Shimone was the only man among them who had a job. He would sneak out before daybreak and sometimes stay away several days, changing his route and schedule often so as not to be followed.

Jacob and Anna could hardly sleep that night due to excitement, but they finally dropped off. Their mother woke them very early, and they smeared dirt on their hands and legs.  Jacob put on an old, tattered tunic. Mama gave Anna a faded headpiece, and arranged it to partially cover her face. The dress the girl wore was patched in many places.

“Come, we must go,” Shimone hissed from the doorway of their little chamber. Mama gave them chunks of bread and some dates to take along for breakfast, and they quickly followed Shimone along the passageways. These were lit by lamps all along the way. They looked longingly at Tunnel Three, the passageway that they weren’t allowed to use.

“I know,” said Shimone. “That would take us right out near the marketplace, but it could crumble at the slightest weight.”

He led them instead by a long, round-about way. They would have quite a walk once they were topside. He hurried them along for soon it would be daybreak. Finally, they poked their heads up through a hole in the stone pavement, and climbed out into a shadowy alley. Sure enough, pink and orange streaks in the sky overhead showed that the sun was already up. The children looked above them in delight at the rosy sky, and took long breaths of the cool, clear morning air.

“You know what you’re to do. God be with you….” And their guide was gone, slipping out to the main road. 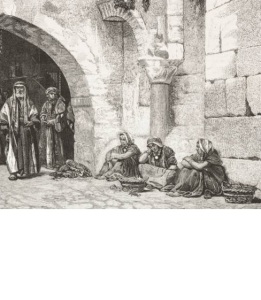 Excitedly they looked at each other, and then at a group of merchants hurrying by to set up shop in the marketplace.

“Let’s go!” said Jacob, and they gleefully ran out of the alley, joining the throng of  people.

Would they be able to buy food without being recognized?  Would they get safely back to the catacombs?

Note:  I acknowledge that many historians believe that the catacombs were used for temporary hiding places rather than long-term dwellings. Also most people think of the catacombs of Rome in relation to the early Christians, but these hiding places were in certain other cities as well. 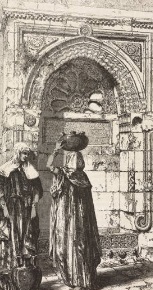 The Catacombs:  burial places under the ground where Christians sometimes hid to escape their enemies

Persecute:  to cause suffering, especially because of political or religious beliefs

Recant:  to turn away from your beliefs

The Twelve:  the twelve disciples whom Jesus taught when He was on earth

Brothers:  the Christians thought of themselves as a family. They often called each other brothers and sisters

Coliseum:  Roman games and contests that were often held in a large arena in Rome. Some were harmless, but others were more deadly. Prisoners were forced at times to fight lions and other wild beasts

The Way:  the name for the Christian believers at that time